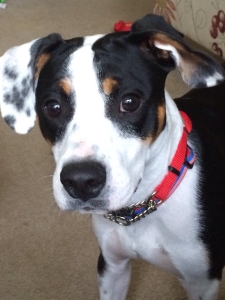 My phone rang one early morning; the caller was very anxious: “He may have to go back!” Elizabeth was tired, frustrated and at her wits’ end. “I’ve never given a pet back before, but I don’t know what else to do!” Following Austin’s adoption, she had taken the week off to bond, establish a routine and spend time with her new baby. She had created the perfect beginning: new toys, leash, puppy collar, kennel for his safety while she was gone, safe dog bones, etc. – all of the new-puppy essentials. Since I knew this 5-month-old pup was very active and not the perfect candidate for apartment living, I introduced Elizabeth to a professional obedience trainer, so they could get off on the right foot/paw. But, plenty of activities occurred prior to that appointment with the trainer.

Austin’s introduction to his new home involved his racing from room to room, barking and ripping his new toys into shreds. Elizabeth tried to pry those very expensive, “indestructible” toys from his grasp, to no avail. With no “Let go” command in his repertoire, he clung to each broken piece with the jaws of life. Teaching him to release would be a priority for a future obedience lesson.

Walking on a leash was also a challenge. Every rabbit and squirrel beckoned a chase by taunting him with its tail. With Austin gagging and pulling, Elizabeth fought to control this headstrong, energized 28-lb. dog. Leash-walking was also bumped to the top of the obedience training list. Then there was his incessant barking in the apartment, which could easily result in eviction. It was hard to choose which behavior to address first without overwhelming owner or pup.

“I wonder what kind of dog he is?” Elizabeth mused. Beagle? Jack Russell? Foxhound? American bulldog? He possessed a strong prey drive and jaws of steel, and bayed like a hound. His black, tan and white markings resembled those of a beagle, and his ability to jump 5 feet from a standing position screamed Jack Russell terrier. This dog has to have a job, and quickly! To reduce Austin’s often-frenzied behavior, Elizabeth began a walking routine, accompanied by a lot of frustration training him to walk on a leash. The walks started at 3 miles in the morning, 2½ miles in the late afternoon and 2 to 3 miles before bedtime! Apartment-style ball throwing and broken-toy mouth retrieval came in between. “What am I going to do when I return to work?” asked Elizabeth. Austin barked loudly at noises heard from inside the apartment building, jumped on the windowsill to bark at neighbors, and barked when put in his kennel. Elizabeth was feeling like a prisoner in her own home. The frustrations were quickly replacing the joys of new-puppy ownership. She had seven days to control this new puppy or return him to his former foster mom. Her head said to return him, but her heart couldn’t let him go. She enjoyed challenges and was already becoming very attached to this dog.

The next initiation that’s imperative when acquiring a new pet is the first visit to the veterinarian. Establishing a positive working relationship is important, since the doctor will help guide care and treatment of this important member of your family. Austin made his presence known in the vet’s office by barking at the other dogs, pulling on the leash to the point of making a loud gagging sound, then screaming while throwing his body into gyrations before the vet could even examine him. She was patient and was finally able to finish the examination, but everyone in the room was exhausted from the struggle. He left with a clean bill of health. Now he could officially be registered for obedience class.

Due to timing and availability, the appointment for his one-hour private obedience lesson came just a few hours after his veterinarian appointment. We arrived for the lesson, but Austin was not himself. Tired from the struggle at the vet’s office and possibly the vaccine boosters given, he did not demonstrate any of the unruly behaviors that Elizabeth needed to have addressed. In hindsight, this worked out for the best. Having a calm dog allowed the obedience instructor to work with Elizabeth on basic skills and how to apply them while developing a new routine. She left the lesson with a plan and felt optimistic that everything would work out.

I received a text, then a call when I didn’t answer the text immediately. A panicked voice said, “I can’t take it anymore!” Austin quickly bounced back from the aftereffects of the booster shots and became a terror in the apartment. He barked constantly, jumped onto the couch and the windowsills, and demolished every toy that had “for extreme chewers” written on the packaging. This voracious chewer was eating himself through the apartment. In response, Elizabeth and Austin continued walking and walking and walking. They were up to 6 miles a day, which barely took the edge off his insatiable appetite for activity and destruction. I began asking friends and dog experts for advice and helped Elizabeth whittle down her list of options. She still had a few days left in her agreement, so he could be returned to his former foster mother if this became even more unbearable.

One thing she noticed is Austin rubbed his skin everywhere, including in the grass. Maybe his behavior was due to itchy skin? He had red bumps on his belly, which led to another veterinarian visit. Elizabeth changed Austin’s diet and gave him medications, but those took awhile to work. There were so many pieces to this puzzle, and nothing was a quick fix.

That first week in the life of Elizabeth and Austin was jam-packed with learning. Looking back through the texts and phone calls I received while trying to help my friend navigate through these obstacles was daunting. We watched Cesar Millan shows, and although not all techniques should be used in all situations, the shows taught Elizabeth the importance of being a pack leader, being consistent and being tenacious – if she could stick with it, she may see results.

Here are some of the training techniques used that first week:
• Walking – Cesar Millan-style – with Austin by her side wearing a training collar, and walking in the opposite direction when he tugged at the leash.
• Teaching him to “Wait” at all street corners – since he tried to pull her into traffic.
• Extending the walked distance – once Austin was able to walk on a leash without lunging for every squirrel that taunted him.
• Using a doggy backpack – laden with a water bottle on each side to wear him out faster during walks. The obstacles: He didn’t want to walk with it on, and then he didn’t know how to navigate through the door with extra padding on his body.
• Teaching basic obedience skills – like “Sit,” “Down,” “Kennel” and “Quiet.”
• Using a water squirt bottle for dire emergencies – when he was zooming around the apartment, while biting everything he passed.
• Toenail trimming – the attempt at which was a full-contact sport! At first, Elizabeth held him in her lap on my ottoman, while I approached with the Dremel. Austin shot his body backwards, which caused Elizabeth to fall off the ottoman, almost hitting her head on my tile floor. We switched, and I held Austin in a stronghold, while Elizabeth used the grinder. I had scratches and bruises on my arms and legs from the event, and no nail was ever touched. This would be a challenge for another day.

Everything became a routine. He wasn’t given any treat, food or toy without being asked to perform an obedience behavior. Elizabeth slowly became the pack leader, and by anticipating any bad behaviors Austin may have, she was able to head them off, often avoiding potential disasters.

Now, why was Elizabeth continuing to give Austin a second, third, fourth chance? Amid the challenges, there were many easy-to-forget positives. Austin is adorable, funny and mischievous in a Dennis the Menace kind of way. He makes her smile, and believe it or not, he enjoys snuggle time. Yes, there are times when, like an overactive toddler, he collapses after moments of high energy, and the innocence he portrays as he sleeps erases the moments when she feels like pulling her hair out. Austin is quite the snuggler and snorer, as well. He has a way of using his eyes to draw you in, and his antics can be quite hysterical.

Elizabeth has become attached to both Austin and the challenge. She can see small progress, which is often followed by regression, but she is learning how to teach Austin to learn. She is molding his behavior into something she can live with. Her biggest regret is the money spent on too many toys, which were quickly destroyed. They overstimulated, sending Austin into a frenzy.

The next step in the training process is formal obedience class. There are many fears, mainly not knowing how he’ll react around other dogs. Will he become over-the-top crazy when toys are used? Elizabeth’s biggest fear: Will they pass the class, or be told to take Novice again? We talked about how there is no shame in repeating that class, since sometimes those basic skills take time to learn. That will be a story for another day.

The biggest news is that I got a call from Elizabeth on the seventh day of having Austin, to say she could not give him back. It was a very long week, but she saw results. Austin had already been in four foster homes before she brought him to her own, so she knew it would take more time for him to adjust. He had experienced a lot in his five months of life, and knowing he was already in the “teenage” stage gave her hope. She made the long-term commitment of a life together, and Austin finally got his forever home. But, there is so much more … Stay tuned for the saga of this rescue dog, as both Elizabeth and Austin face more life challenges together, which in turn, changes both of their lives.